Italy has issued an order earlier this week stating that CBD is now considered a narcotic, according to the Italian Ministry of Health. The compound “cannabidiol” has officially been banned from the Italian market.

As stated by HempToday, “From 31 March 2021, CBD food, drink, oil and supplement brands must be able to prove that products released to [the EU] market before 13 February 2021 has a validated novel foods application to be legally allowed to sell in stores. It applies only to ingested goods, meaning CBD vaping lines are exempt.” 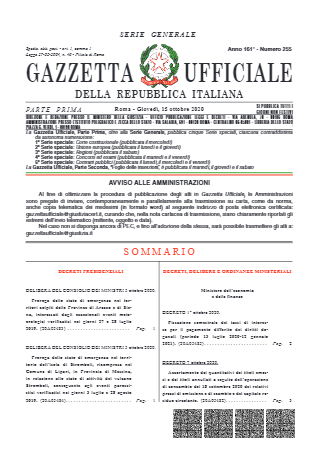 Official ordinance stating the ban of CBD in Italy

Spectators believe the notion of CBD being considered a narcotic comes in preparation for the CBD-based drug Epidolex which is set to begin selling on the Italian market in the coming months. Epidolex has been the only FDA approved drug that can currently be sold in the US. It has been proven effective in those who suffer from Dravet Syndrome and Lennox-Gastaut Syndrome - two severe forms of epilepsy.

Similar to the Italian laws, New York made relatable moves when they banned edibles due to companies making false claims about the benefits of their CBD Productss.

It is believed Italian officials are allegedly following the blueprints of the reference made by the United Nations in 1961 which states cannabis extracts, from either marijuana or hemp plants, should be classified as a narcotic.The consequences of this new order could mean that up to 50% of all CBD brands in Europe could be shut down by early 2021.